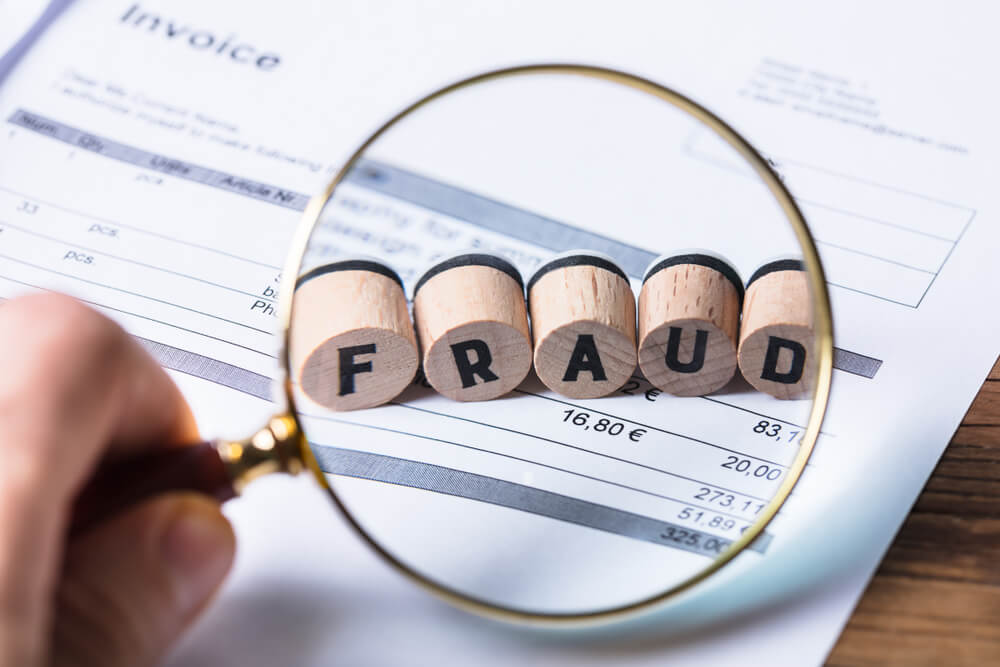 Business email compromise (BEC), also known as CEO fraud, whaling, email account compromise (EAC), or invoice fraud, is a tried-and-tested attack method. Since 2013, BEC scams have been responsible for close to $12 billion in company losses. And this figure continues to rise, as, in 2018 alone, the said scams cost victims $1.3 billion.

In this post, we will look more closely at two cases of invoice fraud that caused Facebook and Google to almost lose a total of $123 million just this year. We will also demonstrate how our Domain Research Suite (DRS) can help companies prevent their employees from falling for such attacks.

The Attack: Even Tech Giants Can Fall Prey to an Elaborate BEC Scam

Making mistakes is a given; it is part of being human. And while committing an error is not a crime, when it comes to cybersecurity, it could lead to detrimental consequences.

In a corporate environment, one error, when overlooked, can lead to a financial loss of $3.92 million. Worse, human error is responsible for a quarter of the total number of data breaches. And as our featured incident showed, even tech giants like Facebook and Google are not immune to risks. Earlier this year, Facebook and Google were tricked into paying out $23 million and $100 million respectively to a BEC scammer from Lithuania.

Evaldas Rimasauskas was a Lithuanian citizen who pled guilty on 20 March 2019 to one out of five counts of wire fraud that induced two U.S.-based Internet companies to wire over $100 million to bank accounts he was in charge of. He stands to face a maximum sentence of 30 years in prison.

Rimasauskas registered a fake company in Latvia whose name resembled that of a hardware manufacturer in Asia (i.e., Quanta Computer) that Facebook and Google did business with. He then posed as someone from Quanta Computer’s accounting department to convince the victims to pay for fake invoices via email.

Rimasauskas exerted great effort and spent time crafting his clever social engineering ruse to trick Facebook and Google into handing over vast sums of money. Here is a detailed account of his scam:

While everything turned out in favor of the two tech giants, this case shows that even the most accomplished tech organizations could fall prey to ingenious invoice scams. Not all victims are quite as lucky, however.

What if a swindled company does not have the technical resources or expertise to track down attackers? And even if they manage to do so, what if they do not have the financial capacity to file a legal case? How can they prevent their employees from getting their businesses entangled in invoice fraud?

BEC scammers succeed because they prey on their targets’ inability to tell what is real from what is fake. Cybercriminals bank on the trust that is forged between companies that have ongoing business relationships. In fact, more often than not, email recipients do not scrutinize the addresses of who seem to be trusted contacts.

And so, they end up clicking on links to malicious sites and divulging credentials that the cybercriminals then use to compromise their accounts. Alternatively, they end up sending confidential files to eagerly waiting threat actors. Or, in this case, wiring funds to bank accounts under the cyber attackers’ control to pay for goods and services that they did not receive nor even order.

As in most cases of fraud, BEC attacks are addressable. Organizations like Facebook and Google can enhance their existing security solutions and frameworks with Domain Research Suite’s many components, as illustrated in the following cases.

Distinguishing between Real and Fake Domains

With WHOIS Search, recipients can check if the domain of the sender’s email address matches that of their supplier. Let us say, for instance, that the attacker used the domain quantatvv[.]com in their scam. Note that this was not the domain Rimasauskas used – it was a randomly chosen typo version of quantatw.com for demonstration purposes only.

A WHOIS Search can easily help distinguish between the supplier’s real domain (i.e., quantatw.com) and a potentially spoofed one. Take a look at the results for each domain below. 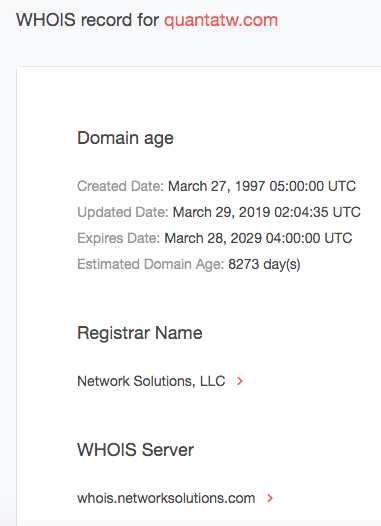 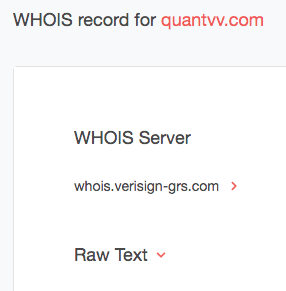 Based on its WHOIS record, quantatvv[.]com is not even registered and thus should not be active. It is dormant but we have seen such domains abused in attacks in the past. Take the case of Spammy Bear, for instance, where threat actors exploited a weakness in GoDaddy’s network to use inactive yet legitimate domains to wreak havoc with sextortion and bomb threats throughout 2018. The Spammy Bear operators hijacked thousands of dormant domains for their spam campaign by registering free GoDaddy accounts and telling its automated Domain Name System (DNS) service to allow them to send emails with those domains from an Internet address under their control.

Taking a Proactive Stance to Cybersquatting

Quanta Computer, meanwhile, which unknowingly ended up being abused as part of Rimasauskas’s scam, can prevent similar incidents from happening in the future with the help of another Domain Research Suite component, Brand Monitor. This tool allows users to keep track of unscrupulous individuals who may be dragging its name into attacks. Here is a guide to using it:

Proving You Are Not Part of a Cybersquatting Attack

Now, let us say that one of your clients asks you if you’ve recently sent an invoice for the purchase of 10 servers. It turns out that you did not. As this sounds suspicious, it would be a good idea to ask the client for the invoice sender’s email address so you can investigate the case.

You learned that the questionable email was sent from the domain quantatv[.]com. Note that this domain was randomly picked from the Brand Monitor misspelled domain results for quantatw.com. We are not saying it is malicious. It is just used for demonstration purposes.

Query both domains on WHOIS Search for a comparison. The table below show the details from their WHOIS records:

With this information, you can confidently indicate that the email did not come from anyone in your company. Tell the client the differences between your and the questionable domains’ records. Also, you may advise that quantatv[.]com, for instance, is newly registered and talk about the dangers that newly registered domains pose. Emphasize the difference in location looking at where the domains are hosted as well.

In case the owner of the misspelled domain turns out to be a fraudster, it would be wise to add his name to a tracker in Registrant Monitor, another Domain Research Suite component. Doing so is an excellent way to keep track of identified malicious individuals’ activities.

Organizations, regardless of their size, could become victims of costly invoice fraud. That said, they should invest in educating and training their employees to exercise due diligence before approving financial transactions. Facebook and Google were lucky to have recovered their money from the scammer, but others such as the following are not as fortunate:

These stories make it crucial for organizations to be wary of committing seemingly harmless errors that could cost their business millions in losses. To avoid suffering the same, they can:

For more information on how our solutions can help your business avoid financial losses that result from cyberattacks like BEC and other scams, feel free to contact us at